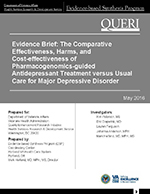 The clinical scenarios evaluated by this evidence brief are the use of pharmacogenomic testing for predicting effectiveness and harms of antidepressant treatment for certain adults with depressive disorders, such as prior to initiation of antidepressants or after failure of one or more courses. Areas of particular relevance for evaluating evidence for this use of genetic tests include Analytic validity, Clinical validity, Clinical utility, and Ethical, legal, and social implications (ACCE Model, National Office of Public Health Genomics). Within this evaluation framework, this evidence brief focused on clinical utility and post-pharmacogenomic testing analytic factors. The VA Office of Research and Development (ORD) originally identified key questions and associated Population, Interventions, Comparators, Outcomes, Timing, Setting, and Study design (PICOTSS) characteristics of interest to be addressed by this report. The ESP Coordinating Center investigators then worked with ORD to clarify and refine the key questions and PICOTSS as listed below and illustrated by the analytic framework.

1) What is the impact of using pharmacogenomics-guided antidepressant treatment on remission, response, quality of life, and functional capacity in patients with MDD?

2) What is the impact of using pharmacogenomics-guided antidepressant treatment on reducing time to remission, response, improved functional capacity or reducing treatment switches in patients with MDD?

4) How does the use of pharmacogenomics-guided treatment impact risk of harms of antidepressant medications?

5) Does the impact of using pharmacogenomics-guided treatment on the effectiveness and harms of antidepressants differ according to patient characteristics such as demographics, psychiatric and medical comorbidities, depression symptomatology (eg, melancholic, atypical, psychotic, catatonic, postpartum, anxiety features), depression severity and duration, history of antidepressant treatment resistance, concomitant medication, polypharmacy, medication side effects, nonadherence, or other health or lifestyle behaviors?

6) What is the cost-effectiveness of using pharmacogenomics to guide treatment of patients with MDD?