Evidence Brief: Update on Prevalence of and Interventions to Reduce Racial and Ethnic Disparities within the VA 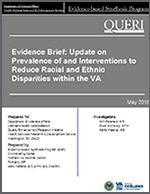 The objective of this evidence brief is to update the findings of previous ESP reviews on the prevalence of and interventions for reducing racial and ethnic disparities within the VA. The ESP CC investigators and representatives of the OHE worked together to identify the population, comparator, outcome, timing, setting, and study design characteristics of interest. The OHE approved the following key questions and eligibility criteria to guide this review:

Key Question #1: In which clinical areas are racial and ethnic disparities prevalent within the VA?

Key Question #2: What are the effects of interventions implemented within the VA to reduce racial and ethnic disparities?